371 views
4 min read
Add comment
FacebookTwitter
Three Tips To Become a Better Surfer
I drove into a parking lot in southern France last month. I knew the Quicksilver Pros had a rest day and I was hoping that not too many of the surfing superstars would make their way up north. The sandbanks were really good this year and the swell was solid. I grabbed my board and started walking toward the break. I ran into John John Florence kicking with some of his pro homies all decked out in custom Hurley wetsuits trailed by a stream of photographers. I am never quite sure how to act around pro surfers. They probably get sick of people going gaga over them (unless you are a hot French chick, which I am not) and so as I passed him I gave him the ‘what up bro’ head nod. He was cool and nodded back. I was just another piece of human seaweed floating by his awesomeness. I got to watch him surf the peak next to me later that day and realized he deserved more than a nod, he likely deserved the double nod with a shaka thrown in—next time. These young guys are so impressive, Gabriel Medina and John John are barely though 20 years old and are already becoming surf legends. I was never really into contests growing up, but with all the new technology these days it sure is fun to watch the best surfers in the world surf the most challenging waves in the world.
My bro Franco said to me the other day that he thinks his surfing gets better after he watches a contest—he might be right, let’s examine why. Malcolm Gladwell talks about the ten thousand hour rule in his book Outliers: The Story of Success, which he proposes is required to master any art form or sport. The Beatles, for example, used to play clubs Germany for 8 hours a day for weeks on end before they got famous.
Gladwell writes that they played for 1200 hours in the span of two years. That’s more time than most bands play in their entire career. The Yellow Submarine does kind of have a German Polka feel to it, doesn’t it? Tip 1: Spend More Time Surfing What I am trying to get at here is that if you want to do anything well in life you need to put in the time. So the first thing you need to do to become a better surfer is to spend more time in the water. If you want to surf better, then you’ll need to surf more.
Be the last one of your bros to get out of the water and catch as many waves as you can per session. When you are in the water concentrate on surfing. You can talk about that new hot chick you saw at Mondos in the car on the ride home. Tip 2: Surf With Someone Better Than You If you surf with kooks all the time then you will remain a kook for longer. There is this awesome saying that you are the result of the five people you spend the most time with. Hence, your surfing is the result of the five people you surf the most with. Surf with someone who is better than you and spend some time watching them surf:
Tip 3: Have a Bro Take A Video Of Your Surfing You remember those Facebook pictures of people thinking they were surfing one way and then the cold reality of what their surfing is really like? 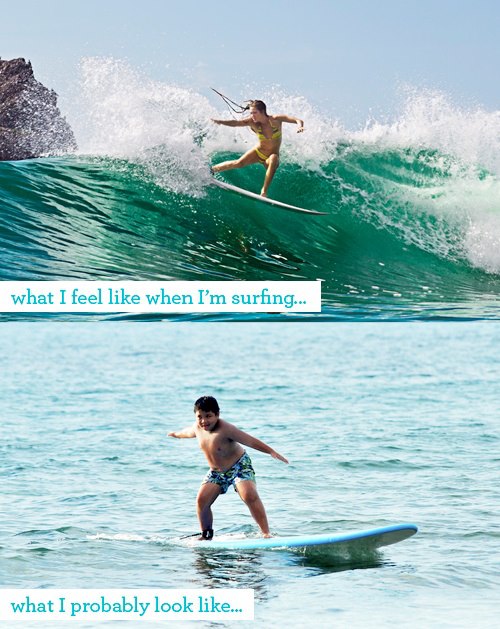 Watching yourself surf on video is a great way to analyze your technique. Where is your front and back foot placement? Are you bending your knees and extending in your turns? What is the angle of your board on takeoff? How deep is your bottom turn and how vertical is your off-the-top? These are just a few questions you’ll need to ask while watching your personal surf movie. Don’t lose sight of the real reason most of us are in the water—remember to have fun.

PS. I hope you enjoyed these tips, grab some eco surf gear at Wave Tribe which will also help your surfing. We got free shipping right now and a few other rad specials: