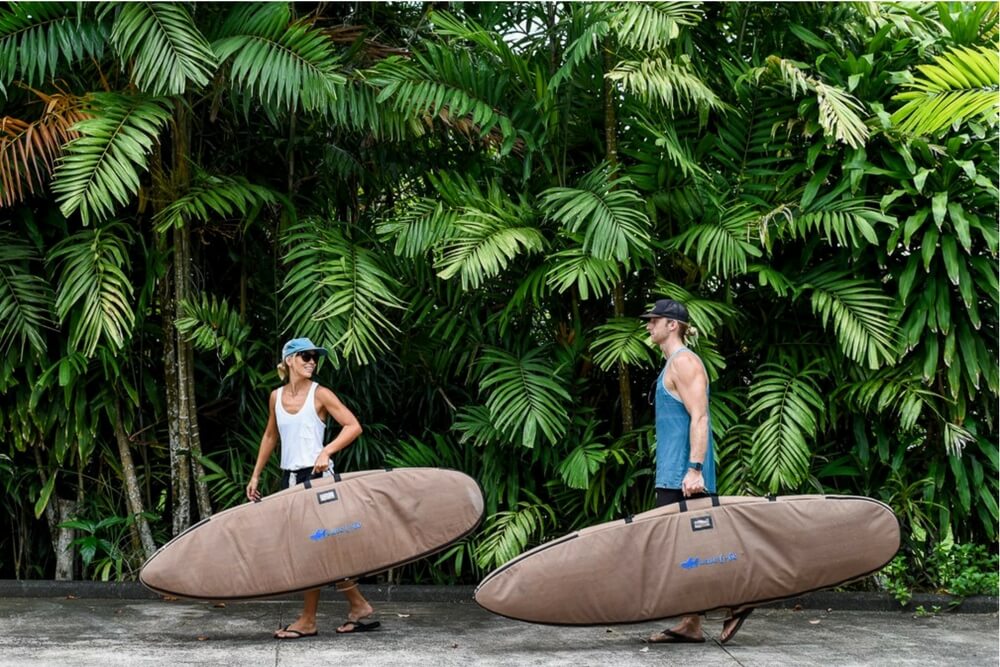 24 views
8 min read
Add comment
FacebookTwitter
Maybe from the outside surfing looks mainly athletic. It may look like hard work. Or to some observers, it may seem like play. Or perhaps to other shoreline watchers the activity in front of their eyes appears like a graceful dance. It's all true.

Hooah! Lead the way! To the current swell.

Maybe from the outside surfing looks mainly athletic. It may look like hard work. Or to some observers, it may seem like play. Or perhaps to other shoreline watchers the activity in front of their eyes appears like a graceful dance. It’s all true.

As surfers we are somewhat aware of how our surfing might appear on the exterior, but we are often more aware from the interior of kinesthetic experience – the sensing, the feeling, the fine adjustments of body-mind-emotions-spirit to the surrounding watery playground or challenge. Though we may keep it simple and speak of surfing in simple descriptive terms or as a narrative of an especially fine or of an especially awkward moment, I think that most of us also have some bit of philosopher in us. We can’t help but connect the dots over time and see patterns of general and special meaning.

Our local surf comrad, in Ventura, Rafe, Rafael, Major Rafael B of the US Army Special Forces, a wounded warrior, is no exception. Being a surf buddy, he agreed to talk with me for a short article about his experience as a local surfer. During the interview at A Secret Garden flower shop and coffee place on Main Street, Rafe came momentarily to one of those places of recognition that sees that the art, discipline, and play of surfing expresses the play of opposites. For him, as a man who was suddenly drawn to surfing in his early thirties, gaining control and his sense of need for control stood prominent as he attacked the surprisingly difficult challenge of standing upon a shakable plank upon a shaking sea. And, he has recognized that paradoxically and sometimes simultaneously there is a letting go of control.

In a similar way that he has attacked the need for highly dependable control of military skill sets that have some demanding athletic elements – rappelling, climbing, shooting, moving fast yet carefully on ground and water, jumping from airplanes in risky conditions, being ready to defend yourself, your brothers in arms, and home country with hands – he has attacked the surfing challenge as a discipline. Yet, it turns out that there are moments of fun, rush, stoke, and pleasing serendipity that suddenly trump the step-by-step learning process and show it also to be art and play, not just a mission to be accomplished.

His unique mixture and approach is working well for him, though sometimes he expresses frustration that he isn’t yet skating and driving hard up and down the mounded surface of water like local live-wire, short-boarder, Kimo. Rafe knows he hasn’t been surfing long, but still…he smiles. It is fortunate that there are many valid ways and styles and speeds of learning. All good.

In one description of what he has been working on to improve his surfing, he spoke initially of learning to “control” his board and his body to drop into a bubbling wave shoulder in just the right spot, and then turning at will his board with all the instantaneous complexity which we know that entails. Yet then he also adds that it is a fluid “integration” with the wave face, as it unwraps itself in front of him. In listening to him mention this latter phrase, “integration with”, one can hear that he has in a sense momentarily disappeared into a whole flow experience in which he and wave movement and the entire dance of the moment feel close to unified, and distinct from a common separation of the doer and the done to. The need for control is again trumped by the immersive beauty that transports us, like poetry, in between our intentional endeavorings.

He got his first surging rush upon surfboard in the whitewater at Mondos in the fall of 2008. Later, after deployment to Afghanistan and Iraq he got to take a 10 day R&R in South Africa, where “phase 2” of beginning this royal Hawaiian craft occurred. Under the spontaneous one-day tutelage of a young local, he began to stand and ride waves more reliably, along those many sweet southern beaches. This was 2010. He was in heaven. In 2012, during his intensive physical therapy for war-wound recuperation, he was able to move to Ventura. He has been so stoked to be close to the water, ever since.

For almost 20 years of a focus-demanding career as serving member of both Coast Guard and Army, with two Purple Hearts, earned rank advancement, specialty colleges, and a master’s degree in security management administration, he has applied himself with tenacity, capacity, and intention to learn well and quickly, via the powerful human tools involving self-control. The reliance upon control, particularly in life-death situations, automatically becomes reinforced.

He has been blown up, so to speak, and injured in various ways, and he has each time diligently rehabbed. This naturally toughens a person and teaches certain things. He suggests that through surfing he has sometimes been lead to learn very new things, to reframe his language and understanding to sync with the broader current of life, and he has been pulled into other fresh facets of being on planet earth. This includes the power of sometimes letting go of control in service of flow and simpler being. Hah – he might think that how I describe what he says and what he does is a bit flowery, but he doesn’t oppose it.

I learn bits and pieces and flavors of surfing from many of the people I surf around. I learn from and I enjoy seeing big Rafe on his 7/2, 8/0, or recently acquired 9/6 drop in, tuck and crouch his long torso into a fast moving curl or along a steep moving face, allowing his broken and recuperating body-mind to release, conform, and answer nature’s specific invitation on that specific wave.

It seems that when we are exposed to careers and to long immersive cultural experiences we are deeply affected and even molded. It also seems that societies have always needed warriors, though thankfully there are times of local peace as well. Fighters are willing and organized to, at least, defend the family, clan, tribe, state, country, and maybe the world. The tasks, skills, and mind-sets necessary to perform in exceedingly stressful and challenging situations is specialized. One needs to attend to, with intensity, various features of a situation, and one has to curtail attention to many natural features of self, like fear, curtailings that get to express themselves only when security is assured and belonging and trust are present. We, at peace, get to relax when those at a battle’s edge can not. Staying keen on that edge can take its toll in different ways.

B sees surfing to be various things. Among them, surfing is spiritual. Though he is hesitant to over-define it, he acknowledges that his healing, of body, mind, spirit, and living in the world outside of missions and checkpoints and readiness, has been due to the blessings of surfing. On the pulsing water, he can forget so much of what has necessarily occupied him during 12 years of combat when he is applying his potent intentions to learning surf skills or when inadvertently he is letting go to the beauty of wave and flow. Rafael says that surfing (he smiles often when he speaks of it) and his lovely fiancé, Lori, have been two huge influences towards a slowly returning faith, a broadening vision, and a reopening of some of his childhood personality. I can relate to that – now deep into my second childhood – hah – thanks much to surfing.

If you know or have seen Rafe, you know he is a good guy, and he is in love with surfing. He says he feels grateful. Not only is it his physical healing balm that maybe saved his life, but it is a delicious rallying point for self, a place of social camaraderie, and a source of great spontaneous laughter, chuckles and smiles. He sees himself in “phase 3”, a long way from Mondos’ phase 1, and he is barely imagining what phase 4 could be like. Hah.

Thanks, Rafe, for your being willing to put yourself in harm’s way for others, and thanks for being one of the tribe along the water’s edge, keeping the sweet stoke peppy. Though he can philosophize and thereby can take on greater meaning, mostly Rafael is thinking and sometimes shouting a rallying cry in his head, Hooah! Lead the way! To the current swell.

Douglas Honeyman began surfing at age 63 and it is the most rich and fun activity he has been immersed in since he was a young man. Being retired as a licensed psychologist, he is able to take to the waves around Ventura California almost daily. Doug favors a longboard and likes to learn in his own way and to find his own natural style and rush, within the limits of age and experience. He began skateboarding at age 66 on a downhill longboard that he made, and though he's careful of dem ole bones, he likes to bomb moderate hills and slalom parking lots. As a writer, he enjoys finding storyline on the outer face of life and blend that with dimensions of our less known interior life. He relies on flow, as he does in surfing and skating. He supposes he is somewhat like a visual artist whose eye is always informed by the mind behind the eye. Therefore, he isn't always sure what will flow out onto paper and silicon. Hah!